New projects on the shelf for Incubus 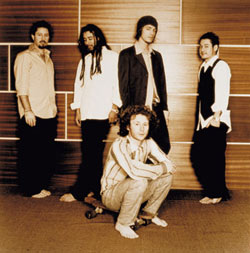 As singer and songwriter Kate Earl has learned, there are pros and cons to collaborating with members of one of the biggest rock bands in the world.

Recording and now and then performing with Incubus guitarist Mike Einziger, bassist Ben Kenney and drummer José Pasillas have brought her credibility and expertise, but the guys are obviously not the most committed bandmates.

"I don't remember any of the songs," Einziger said backstage at a recent show with Earl. "We just get up onstage and start playing and see what happens. It's really fun, though — totally on the fly."

For Earl, whose tender voice and Alaskan roots have garnered her comparisons to Jewel, the required spontaneity is worth

"So many people haven't heard my voice yet, and I would really like to get in front of them," she spoke after the

Earl, who left a life of solitude working at the family gas station, came to Los Angeles to launch a music career five

years ago. She met Einziger through the president of her label (Record Collection), who went to high school with the

"I had, like, one or two songs when I was signed, so I would hang out at Mike's house and he would record my ideas and

flesh out stuff," she said. "He asked the other guys to come listen and play, and they all ended up on the album."

Einziger also hooked Earl up with Tony Berg, who produced her debut, Fate Is the Hunter, released in May.

"I'm really proud of her," Einziger said. "A lot of good things are happening for her, and a lot of people are starting to

pick up on her music. I'm sure we'll do more musical adventures together in the future."

Einziger, it seems, is spreading his collaborative wings even wider. After working with Earl, he signed on to handle

production duties for a band called Agent Sparks, with which he also has a personal connection.

"My younger brother Ben is the guitar player and singer of the band, and my brother Paul [Fried] is the bass player," he

Agent Sparks released their first EP, Not So Merry, in mid-September and will follow it up with a full-length record due

"They're doing a tour that's sponsored by MySpace with a lot of other bands that are probably heavy rock," Einziger said

of his pop-rock protégés. "They're gonna stick out like a sore thumb. It'll be really cool."

Merrick and the Channel Islands Surf Team. Incubus singer Brandon Boyd narrates the movie, and Incubus and other surfer

With their side projects behind them, Incubus returned to the studio last month with producer Brendan O'Brien.

"We always make our records really quickly, and this time we're gonna just slow it all down," Einziger said. "Usually we

more time writing than we ever have."

Even though they're looking for quiet in the studio, the guys are already itching to get back on the road.

"We're talking about doing some shows in South America maybe later this year or sometime at the beginning of next year,

whenever we feel like it's a good time to split and go down there," Einziger said.