George Martin inducted in the Uk Music Hall of Fame 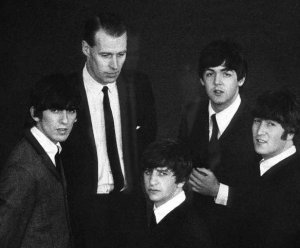 Also known as the 'fifth Beatle', producer George Martin was inducted into the UK Music Hall Of Fame on the 15th of November. Razorlight's Johnny

Borrell was joined by Corinne Bailey Rae, Roger Taylor from Queen (on drums), Jose Gonzalez (on guitar) for a medley of tracks from Abbey Road in

honour of the great man. 'Golden Slumbers', 'Carry That Weight', 'The End' were backed by a massive orchestra and conducted by George Martin

Prince accepted his induction from Beyonce, James Brown was lauded by Soul II Soul's Jazzie B. Joss Stone played in honour of Dusty

Beach Boys legend Brian Wilson was also inducted, and performed a few of his classic songs, including the 1966 Number One 'Good